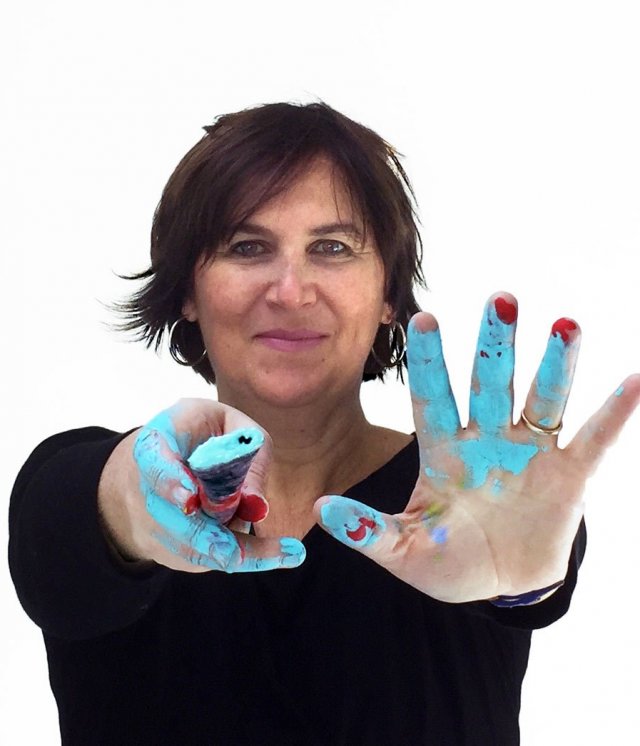 The artist Nicoletta Belletti was born in Parma where she lives and works. The magic of the matter that is moulded and manipulated directly on the canvas can be seen in her work. Her artwork is vibrant, colorful and magma-like and it shines with brilliance and liveliness. Her subjects range from animals and portraits to flowers which speak to us of a deep, fulfilling joie de vivre with a shower of petals.Painting is a profession for the patient, a question of caring and, as always, love.

Painting is what she likes to do.

icoletta Belletti lives and works in Parma. An original artist, she has developed a personal technique in which the material has become substantial, and distinctive of her paintings. She creates her works using material acrylic on the table, spread with a spatula and with the addition in some cases of elements such as sand or stones. Portraits of people, animals, flowers, more recently the water and the sea, are the subjects of his works. Since 2000, she has exhibited her works with a growing interest by the public. To create a permanent exhibition of his works, she opened more than 10 years ago an exhibition space in Via Farini 63, Parma, where she receives clients and guests by appointment. Her artistic activity is vibrant and constant and ,among the various commitments, she’s been collaborating with the Centro Botanico Moutan in Viterbo for five years, she’s been abroad as a guest of Codap and in Parma she is currently president of the Art Group Confartigianato Apla.

She had been invited to participate in “State of the Art – Emilia Romagna” Italian Pavilion of the 54th International Art Exhibition Venice Biennale, curated by Vittorio Sgarbi, with the painting “Me and my friends”

Flowers. The series that characterizes the beginning of the path of Nicoletta Belletti is linked to the “flower”. This inspiration was born in the artist as a challenge, the one to reinterpret and give new artistic life to a subject too often considered a cliché. With Belletti’s material technique,  flowers on the paintings take a form of their own, invigorating with irreverent petals that protrude from the spaces, they bloom and almost impose themselves with arrogance and desire for redemption. Cheerful, colorful and modern, they explode in all their vividness. The flower remains today one of the favorite subjects of the artist, just because a source of unlimited discovery, for the variety of shapes and details, to revise and reinvent. A constant research that brings Belletti’s flowers to escape from banality, translated from the hand of the painter in a natural dimension that delights and disarms in all its simplicity.

Portraits of animals. After flowers, Belletti discovers the charm of painting animals as pictorial subjects. That’s how a second series of inspirations is born and leads her to paint dogs, cats, donkeys, parrots, cows, horses. Still produced with acrylic on wood, faces and details are made with an original and expressive cut. In front of a background lit by vivid colours and with an almost unreal touch, the “human” looks of the various depicted animals emerge “alive and real”. Figures assuming an identity, the dog is sad, the chicken is angry, the fly ready to take yet another flight. “Portraits of animals” is a series that has been widely popular among the public. The characters are striking for their genuineness, their ability to be flirty and humorous, honest and direct, emphasizing the expression of character rather than stylistic virtuosity, with unique and far from portraiture classical schemes originality.

Jellyfish. After the series of flowers and animals, Belletti has recently  produced, as new subjects, jellyfish and fishes, always carried in her personal style, with the technique of material acrylic and resin on wood. The marine suggestions are indeed a return to certain paintings already made in the past by the artist, which resume moments of underwater life. Jellyfish now become a third artistic trend, which plunges into the depths to capture beauties and perils of the sea. The eye of the painter sinks between shoals of fishes that move in unison, photographed by the brush in their silent passage, while the jellyfish seem to float on the table, with their ruffled and threatening tentacles, frightening and fascinating, fugitive even in the material dimension that captures them and crystallizes their movements and their colours.

Nicoletta Belletti lives and works in Italy, Parma. Her technique, rich in texture and resin, makes her works unique and distinctive.
CONTACTS

This website uses cookies to improve your experience while you navigate through the website. Out of these, the cookies that are categorized as necessary are stored on your browser as they are essential for the working of basic functionalities of the website. We also use third-party cookies that help us analyze and understand how you use this website. These cookies will be stored in your browser only with your consent. You also have the option to opt-out of these cookies. But opting out of some of these cookies may affect your browsing experience.
Necessary Sempre abilitato
Necessary cookies are absolutely essential for the website to function properly. This category only includes cookies that ensures basic functionalities and security features of the website. These cookies do not store any personal information.
Non-necessary
Any cookies that may not be particularly necessary for the website to function and is used specifically to collect user personal data via analytics, ads, other embedded contents are termed as non-necessary cookies. It is mandatory to procure user consent prior to running these cookies on your website.
ACCETTA E SALVA